What Was New in SQL Server ODBC Driver Version 2.0.x

What Was New in SQL Server ODBC Driver Version 1.x

Easysoft is the first ISV to enable Linux and Unix users take advantage of SQL Server 2016 features such as:

ODBC 3.8, the latest version of this data access interface, enables procedure output parameters to be retrieved in parts. Because this feature is extremely valuable for SQL Server users who need to reduce application memory footprint when retrieving varbinary(max), varchar(max), and nvarchar(max) types from a stored procedure, we have added support for this to our SQL Server ODBC driver. This further aligns our driver with Microsoft's SQL Server Native Client and is the only way in which Linux and UNIX users can take advantage of this feature. We provide a SQL Server specific example for streamed output parameters in our C samples section.

To ensure your users have access to the latest SQL Server data, your Linux and Unix applications may:

SQL Server Query Notifications let your applications ask SQL Server to notify them when critical data has changed, which reduces database round-trips and removes the guesswork from the question of how often the cache should be refreshed.

Easysoft is the first ISV to enable Linux and Unix users take advantage of SQL Server 2014 features such as:

AlwaysOn Availability Groups, introduced in SQL Server 2012, provide high availability and disaster recovery for multiple SQL Server databases without the need for a shared storage SAN. AlwaysOn Availability Groups help organisations maximise IT investments by making full use of standby hardware for read-only workloads. This improves performance on the primary database because read-only workloads can be offloaded to a secondary replica.

The SQL Server ODBC driver supports AlwaysOn Availability Groups by providing two new connection string settings: MultiSubnetFailover, which provides faster detection of and connection to the primary database server and ApplicationIntent, which lets SQL Server know that a read-only connection is required and can be offloaded to a secondary replica.

The SQL Server ODBC driver distribution now includes a bulk copy program (bcp), which lets you import and export large amounts of data in and out of SQL Server databases from Linux and Unix.

bcp enables you to import data exported from client applications directly from Linux and Unix machines. You do not need to copy the exported data file to a Windows machine or make the file accessible to Windows.

If you need to copy SQL Server data regularly, you can rerun your bcp commands by running them from Linux and Unix administration tools such as cron.

The Easysoft bulk copy program is based on the one provided by Microsoft and so users who have already used the Microsoft utility will be able to reuse existing knowledge when using the one from Easysoft.

Use Kerberos Authentication with Mirrored Databases

The SQL Server ODBC driver's Kerberos support includes connection string attributes that let you specify the Service Principal Name (SPN) for a principal or a mirror server instance, enabling you to use Kerberos authentication with mirrored databases.

For example, you want to analyse customer location information visually and are considering using SQL Server 2008 as your database backend because it supports spatial data. You use Ruby on Rails on Linux to develop your client applications for its ease of use and accelerated application development time on this cost-effective platform. The SQL Server ODBC driver transparently integrates SQL Server features with applications running on Linux/Unix such as Ruby on Rails. This means that you can evaluate SQL Server solely on the benefits its features brings to your organisation, the database platform does not have any implications for your choice of client application platform.

To help support the character sets in use throughout our worldwide user base, the SQL Server ODBC driver can now use iconv to convert character data from the encoding used by SQL Server to the various encodings used by Linux/Unix client machines (UTF-8, EUC-CN, EUC-JP, EUC-KR, EUC-TW and so on). This feature can help solve the data integrity issues (data loss/corruption) that face organisations who want to increase revenue by developing solutions for international markets.

To use the SQL Server ODBC driver’s conversion mechanism, specify the encoding used by your client machine with the Client_CSet data source attribute. The SQL Server ODBC driver converts character data to the encoding you specify (assuming the characters are present in the target encoding). Do this if you experience character loss or corruption in your application, for example, when the expected characters are replaced by question marks (?).

The SQL Server ODBC driver’s iconv support means that you can build flexible solutions around the driver that will always have a mechanism for converting data to the client system’s encoding, whatever country the solution is deployed in.

Encryption protects data privacy by rendering it unreadable to all but the intended recipient, who has the ability to decrypt the data.

Using encryption to protect the privacy of sensitive, high value data as it is sent across the network is a SQL Server security best practice.

The SQL Server ODBC driver can secure the connection to SQL Server instances by using both Secure Sockets Layer (SSL) and Transport Layer Security (TLS). TLS is the latest version of SSL. TLS is more secure than SSL because it uses stronger hash function techniques (Hashed Message Authentication Code or HMAC) to ensure that data retains its integrity from the time it is sent to the time is is received.

The stronger the data integrity mechanism, the more protection your SQL Server data has against attacks such as tampering, interception and forgery. For example, without data integrity protection, data is vulnerable to:

By default, the SQL Server ODBC driver and SQL Server machine automatically handle the choice of encryption and data integrity algorithm used to protect data exchanged between the machines. If you have a specific security policy at your site, you can configure the SQL Server ODBC driver to request an SSL cipher suite that corresponds with your security requirements. For example, you can use a cipher suite to ensure the SSL connection to the SQL Server machine meets security policy requirements regarding acceptable encryption algorithms.

An SSL cipher suite is a set of authentication, encryption and data integrity algorithms used to protect data exchanged between machines.

The SQL Server ODBC driver’s support for SSL cipher suites means that you can now use different encryption algorithms to protect different database connections. For example, you need to protect your most sensitive data with Triple-DES encryption; because of the performance overhead associated with Triple-DES, your security policy also permits you protect the privacy of less sensitive data with DES. To meet your security-related obligations while retaining control over the trade-off between security level and performance, the SQL Server ODBC driver allows you to choose Triple-DES encryption for connections to some databases and DES encryption for others.

Because the SQL Server ODBC driver supports government-approved encryption and data integrity standards, it can be deployed in environments where security requirements are defined by regulatory compliance obligations, such as FIPS 140-2 conformance.

NT LAN Manager version 2 (NTLMv2) is a challenge/response authentication protocol supported by Windows. When the SQL Server ODBC driver attempts to authenticate a Windows user, Windows "challenges" the driver to do a complex calculation that proves it has access to the user’s password and "respond" with the results. Windows does the same calculation. If the two calculations agree, Windows authenticates the user, who can then access SQL Server. Because of the strength of its challenge/response mechanism, NTLMv2 is more secure than older versions of the protocol and provides a greater defence against attempts to crack passwords by capturing the challenge/response.

The SQL Server ODBC driver supports both NTLMv2 and its predecessor NTLM.

The SQL Server ODBC driver conforms with the ODBC specification’s requirements for a Unicode ODBC driver. This means that the driver supports Unicode data types and Unicode versions of the ODBC API, which accept and return Unicode data. The Unicode encoding scheme that ODBC expects is UCS-2, which is the same as SQL Server.

However, many Linux and Unix systems use a different encoding scheme to SQL Server and ODBC: UTF-8. This means that the ODBC mechanism for working with Unicode data is unsuitable and unless the application is able to convert between encoding schemes, data corruption may occur.

To enable Linux and Unix applications to work with Unicode SQL Server data without loss or corruption, the SQL Server ODBC driver can now convert UCS-2 encoded data to UTF-8.

This screen shot shows how the SQL Server ODBC driver’s UCS-2 to UTF-8 conversion mechanism enables a popular Linux application, OpenOffice.org, to process Unicode data stored in the Northwind database. Before enabling UTF-8 support in the driver, certain characters are replaced with ? symbols, indicating that the data has been lost because of incompatible encoding schemes on the client and server machines. 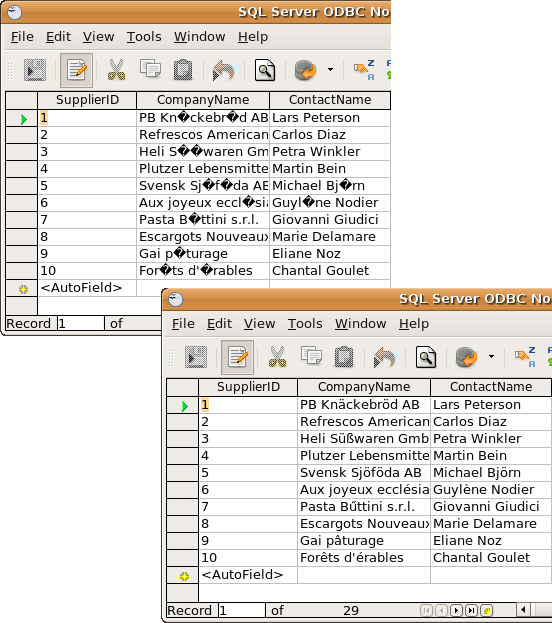 MARS is a SQL Server 2005 feature that simplifies application design by allowing multiple operations to be performed on a single connection. For example, applications can execute other statements (such as INSERT, UPDATE and DELETE statements) while results sets are open. This removes the need for applications to deal with "connection busy" errors or use previous workarounds such as multiple connections or server-side cursors, both potentially expensive operations that can hurt performance.

As part of our ongoing commitment to meeting data access requirements without compromising our customer’s current or future security plans, the SSL version of the SQL Server ODBC driver now supports MARS. This important SQL Server feature is now available to Linux/Unix users over an encrypted network connection therefore.

Oracle is a registered trademark of Oracle Corporation and/or its affiliates.